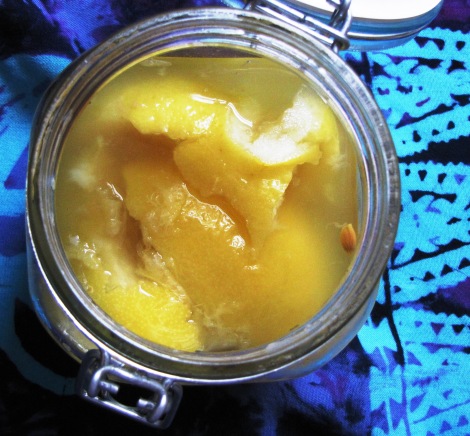 Quite an interesting article by Sasha Senderovich in Tablet Mag on kosher restaurants in Moscow.

Vegan blogger Rachel Grossman explorations contain some real winners. Her vegan cilantro-lime aiol (which she serves with latkes! and says is inspired by HealthyJewishCooking!) is a winner. It’s like a white bean hummos with terrific flavors. If you are one of those people who’s been blessed with cilantro-averse genes and tastebuds (like my husband), you can substitute basil or any other herb. I like the original.

Anyone who reads HJC knows I’m not a fan of gefilte fish. If it’s poached ground fish, call it what you will (gefilte, quenelles—whatever). If you ever see me eating the stuff, assume I am doing my duty as I see it at the moment. And if you see me serving it, I make it for guests since most people seem to like it.

However, I do like British gefilte fish (which is basically fried gefilte fish), fish cakes, and croquettes. And also most Sephardic and Mizrahi recipes, some of which begin with frying the fish first, then poaching.

Here’s an easy one with Maghreb and/or Libyan flavors: Make your favorite fish cake recipe with fresh (cod, hake, salmon, any thing you like) or canned (salmon) fish. Season well with some/all of the following: onion, garlic, chillies if you like (I like), cilantro or mixed herbs (mint, basil, cilantro, parsley), scallions, cumin, ground coriander, cinnamon, lemon or lime juice. You can use Gaba rice, gluten-free oats, ground almonds, or arrowroot as your binder if you want to avoid breadcrumbs. You can use eggs or not.

Form into two-bite sized balls (like largish felafels) and gently pan fry. When brown on all sides, place in pot with flavorful tomato sauce that echoes the spices and herbs you used in your cakes. Cook on low heat for awhile; serve hot, warm or cold, adding small pieces of preserved lemon. (Best served almost cold, and very spicy-hot).

Izevel (Izevel is the original Hebrew for Jezebel) was one of the most evil women who ever lived. Maybe even the most evil. This week, we learn about her and her husband, King Ahav (Ahab) in the supplementary Torah reading. Also this week, we read the main Torah reading, the portion of Pinchas (Phineas.)

According to the mystics, Pinchas was reincarnated as  Eliyahu (Elijah) or in some versions, became Eliyahu when he went to Heaven (he didn’t die, he just went to Heaven!) We are also taught that Eliyahu is one of the angels G-d consulted with when He created the Universe. Eliyahu later reincarnated as Pinchas, and then became Eliyahu once more. Don’t worry if you don’t “get” this stuff; reincarnation is only understood by the mystic-scholars.

In Judaism we compare the soul to a flame. If you take a bit of flame from one candle and light another candle with it, you haven’t diminished the first in any way. I think that’s kind of a simple description of how reincarnation works.

Now, if you are familiar with the story of King Ahav, you know that Izevel his wife, was a murderess and oppressor of the people. (Perhaps the mother of the Inquisition, Isabella I of Spain—whose name, synchronistically enough, is virtually the same as Izavel—was one of her reincarnations.*)

Izevel was part of the baal cult. Baal is sometimes equated with moloch, a false-god who demanded the sacrifice of human children. Did Izavel sacrifice children to her god? We don’t know.

It may be that Izavel worshiped other idolatrous “gods” too. But it wasn’t enough that she was free to worship her false gods; she wanted all the people of the land to worship them too. She wanted to drag everyone down to the depths, with her; if everyone else was doing it too, then maybe she could convince herself it was all right. Evil is misery and misery loves…

You also might remember that Izavel threatened to kill Eliyahu the Prophet. Why?

R. Chana Bracha Siegelbaum has written a very good piece on Izevel and her desire to kill Eliyahu, which beautifully explores some of the commentaries and describes the various incarnations which fuel Izevel’s passionate wish to kill him. R. Siegelbaum’s piece also explains why we read the Haftorah containing Izevel the same week we read the portion of Pinchas.

But incarnations aside, I have to ask: why Eliyahu? I mean, why is it so important that he’s the focus of Izevel’s hatred and blood lust and why was this recorded in the Bible? Eliyahu or Elijah is a very compelling and mysterious character. He’s a totally righteous man, a prophet and an angel. He is present at the bris (covenantal circumcision) of each Jewish baby boy and also visits each house near the end of the Passover seder.

A bris is at the beginning, the first mitzvah a baby boy is commanded to participate in. The end of the Passover seder, when Eliyahu the Prophet arrives and drinks some wine from the goblet we’ve poured for him, is as close to the end of the story as we get (it heralds the geulah, redemption).

Birth and redemption are linked. We’re taught that the “well of souls” must descend into this world to complete their mission and when they have all descended then the redemption, and Moshiach (the Messiah), will come. And who announces the arrival of Moshiach; who will usher in the time when the lion will lie down with the lamb?

Eliyahu. So the inscrutable Angel-Prophet is there at the beginning, and at the end.

It seems that Izevel’s hatred of Eliyahu and love of death may be, at the deepest psycho-spiritual level, due to her hatred of birth and redemption (the opposite of both of which is death).

Nearly ten years ago I heard a terrific talk by Rav Yitzchak Ginsburgh. He spoke of a woman’s power and how the mystics say it will be the voices of women that usher in the redemption. He spoke of Jewish women’s voices “taking to the air” and using various media to educate the world about the power of light and goodness and redemption and love and G-d our Creator. We see so many women writing and speaking; sharing intellectually compelling and emotionally vibrant teachings about how to use our power as women wisely and well:  R. Tziporah Heller, Sarah Y. Rigler, Sara Y. Scheider,  R. Chana Bracha Siegelbaum, Yehudis Golshevsky, and so many others. They are out there, sharing light.

My husband always tells me that whenever a very holy, positive energy rises up, a deceptive, almost equally-powerful dark energy rises up to oppose it (and, by its opposition, actually strengthen the positive energy). As we women develop our voices and find ourselves revealing or learning ancient-new Torah insights, we should keep in mind that Jezebel is here, too. Izevel-energy hates Eliyahu’s mission of birth and life-everlasting. Izavel energy hates the future and therefore hates children. Izevel energy hates goodness and light. Izevel is a soul killer, a death-lover.

Let’s do the opposite and choose life.

**[Correction: Because of the Three Weeks, we read a different Haftorah, but usually, for this Torah Portion of Pinchas, we read the one about Ahav and Jezebel]

*My reader said to be sure to mention that if you are named Isabella, don’t worry! It’s not about you.