I first got exposed to the raw and living foods scene when I heard about Ann Wigmore way back in the 1980s. But I didn’t really fully appreciate that there is a time and place for the healing powers of uncooked foods until I visited Maui in the mid-1990s.

At the time I was living in Oahu and was largely content to enjoy exercising on the spectacular Kailua beach each morning at sunrise. It was a three minute walk from my house. Sometimes I’d drive over to the North Shore where some of the fiercest waves in the world roll in.

But who can resist seeing yet another island in the Pacific? Apparently, not I. I had flown to the Big Island and witnessed (and foolishly walked on) the primal electric spewing of Kilauea volcano after dark. The smell of sulfur and a thousand center-of-the-earth minerals was in the air and all I could think about was Creation. They say it is nearly impossible to recall smells, yet volcano and cumin are two whose scents I can instantly conjure up in my imagination.

Another time, while flying to Maui, our plane flew over a pod of spouting whales (spectacular, I had only seen them from land before). Lahaina, the big town in Maui, was a turn-off. It was over-commercialized in places, self-consciously hip in others, as was much of the rest of Maui except for the empty spaces. But in Paia (Pa-ey-ah), parts of which were an expensive, hippie, Euro-trash “ghetto”, I had a revelation. There, on a very-pointedly laid-back street was the first raw-foods restaurant I had ever seen. It had recently opened.

Back then I didn’t know from kosher. So, I sampled some of their fresh vegan offerings, a raw “pizza” and a raw fruit pie, most likely *bugs and all. Aside from the fact that the food was delicious, the owners of the restaurant looked so much happier and more relaxed than those in the typical vegetarian or macrobiotic or “natural foods” cultures. (More yin to the macrobiotic yang with an overall glow that the Maui macros didn’t have.)

They weren’t worrying about balancing food energies–they just wanted food that pulsed with color and light. Later learned that they too, could sometimes be equally rigid and judmental, but that’s another story. Roll to 2004: I got married. My husband would greet every (bug-free and totally kosher) meal I prepared with: “What’s this? I never had this before? I don’t know if I’m going to like it.” In all honesty, I had never met anyone who didn’t like, no love, my cooking.

This was an amazing challenge from Hashem. I really want to share the story of his weight loss and health improvements, but we’ll save that for another time.

You could call these raw treats brownies, fudge-brownies, or the fudge of the title. But these amazing fudge brownies contain no flour, no refined sweetener of any kind (you can add raw honey or agave if you like, but you don’t have to), and require no baking.

They’re one of my husband’s favorite Shabbos (or weekday) treats and guests like them too. I make several versions of them to please everyone, including a road-trip version.

Not being a really big chocolate fan myself (I can almost feel the gasps of shock and horror), you probably won’t take my word for it that these are wonderful. Here, then, is my friend Sara’s comment: “These fudge brownies are saving my life.”

Like I said, fudge for the perplexed. (Forgive the grammar).

Did I mention that they contain only raw (and if you choose, living) ingredients? 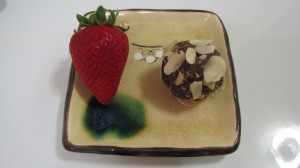 I didn’t invent these fudge brownies, I adapted them from an old recipe from Living in the Raw (1998) by Rose Lee Calabro. Her’s used carob instead of cocoa. But chocolate contains antioxidants and has an anti-depressant effect on many people. This version packs nicely into a lunch box and with the addition of spirulina or wheatgrass powder, these become energy powerhouses. A kind of dessert-meal.

They also make a better-than-you’d-expect substitute for other chocolate desserts and are a perfect transition food when you have a sweet tooth, want to start eating better but aren’t sure where to begin.

This grain and gluten-free recipe can be easily doubled or even tripled.

Make sure dates are at room temperature for easy processing. Pit dates and place in food processor with agave, coconut oil and vanilla and pulse until mixture is fairly smooth. Scrape down sides of bowl and add cocoa and almonds. Process until well mixed. Stir in 1/3 cup roughly chopped walnuts.

You may refrigerate at this point until firm or shape immediately. Press mixture into a 1 ½ inch thick square. Slice into six squares. Or roll into truffles. Place in container and refrigerate or freeze. They freeze beautifully for up to three weeks. They stay fresh in the refrigerator for about one week.

Nut Brownies: Use hazelnuts,  macadamia nuts, or toasted almonds in place of walnuts for a different taste.

Fudge Truffles: Instead of shaping into squares, roll into 10 bite-sized balls. Serve plain or roll bowls in nuts, grated, unsweetened coconut or roll lightly in cocoa powder for a more sophisticated taste.

Living Fudge: Instead of ground almonds, sprout whole, raw almonds overnight, slip off skins, pat dry, and grind in food processor. (To sprout almonds, place in bowl and cover generously with pure water. Do not refrigerate. When they start to swell, and little “tails” appear, they are done.)

*Vegetables and fruits of many kinds of infested with bugs–they can even be found in non-organic produce. Insects are not kosher. Therefore, if you want to observe kashrus, you check your veggies for bugs and wash them very well. There are several techniques that work, but are outside the scope of this post. If you want more information you can contact me at healthyblog@optimum.net.

2 responses to “Fudge For The Perplexed”