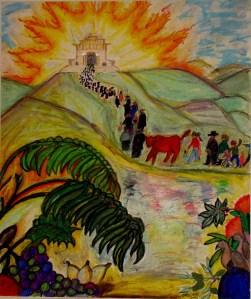 A Taste of Authentic Jewish Eating: Eating mindfully doesn’t just involve your brain-based intellect. It involves your heart-based intellect, both of which, in different ways, correspond to the soul. In the Jewish tradition, mindful eating means making informed choices not only about what you eat, but also about the way in which you eat–the very act of eating. The mechanics of eating as well as your intention and motivation are important. The choices themselves are based on the Jewish spiritual teachings and not on the “moral code ala mode”.

The *Torah offers teachings on food and diet from the basic:  G-d made every tree that is….good for food, grow out of the soil. (Breishis-Genesis: 2:9); to the detailed: …they are repulsive: the eagle, the whilte-tailed eagle, and the bearded vulture… (Vayikra-Leviticus 11:13); to the intriguing, such as the “food of seige”: Now you, take for yourself wheat, barley, beans, lentils, millet and spelt; put them into one vessel and prepare them as food for yourself (Yechezkel-Ezekiel 4:0); and more.

During the time of the previous twoTemples in Jerusalem, an integral part of the order of service involved the roasting of meat and the ingesting of meat by the Kohanim (priests). Eating was a holy act and is, if done right, still a holy act.

But teachings about food and eating didn’t end with ancient times. Less than 900 years ago, the universally recognized Jewish doctor and scholar, Rambam (Maimonides), wrote that most illnesses are caused by improper eating. He offered detailed advice about diet and lifestyle** that is enjoying a great revival today. Rambam’s advice includes prescriptions such as eating until you are only 3/4 full, eating whole-grain bread (and avoiding cakes, noodles and other flour products), not drinking water while eating, not eating aged salted meats and cheeses, not over-eating sweet things (even fruit).

Because the way in which a person eats is so central to Judaism that in one sense it defines who is Jewish and who is not, food and the act of eating were naturally important to the Chassidic mystics who sought to re-imbue the world with holiness by means of passionate Jewish spirituality. One example is Rebbe Nachman of Breslov who said that improper eating causes spiritual problems, (what we could call “blockages of the soul”). He said it is important to strive to eat without any physical desire whatsoever. Of course this is a pretty high level of spirituality–eating purely for the sake of the soul and the life-giving nutrients in the food. However, it is something we can strive for at our own individual level.

The Chassidim in general were very aware that every act that a person does here on earth has ramifications in the heavenly realms and that eating was one of the more potent of these acts. Chassidim teach that everytime a proper blessing is said on food, the food is ingested and the energy created by the food is used by the person for a holy purpose, the holy spiritual sparks embedded in the food are freed from their earthly prison and are able to reunite with their holy source. Chassidim would watch their Rebbe’s every actions, including and even especially his “mundane” ones like eating, and try to emulate him in the particulars.

There are so many Jewish teachings about eating that I’m not mentioning–an encylopedia’s worth.

CHOOSE Choose foods that are good for you. Avoid unhealthy and/or extreme isms that are not rooted in our original spiritual and moral codes such as  veganism (not to mention epicurianism and gourmandism). (I’ll discuss vegetarianism in a later post). Make the choice to eat foods that will, first and foremost, nourish the soul and body . Note: It is far better to under-eat relatively unhealthy foods than overeat even nutritionally-dense foods.

ACKNOWLEDGE
Say a ***blessing over your food or drink. Acknowledge the source of the food and drink you are about to ingest. Jewish or not, thank G-d for creating the food that you are about to it and that He created to sustain you. The Hebrew word for bless is baruch. The word BaRuch is related to the word for well/source, BeR. A blessing acknowledges that the Creator is the source of everything, including the apple pie on your plate. Don’t forget to thank Mom for that apple pie, too.

CHEW (BREATHE) Ideally, chew each mouthful of food at the very least, 18 times. If you have a digestive disorder such as IBS, Crohns, Celiac Sprue, or other inability to fully utilize the nutrients in food, then chew each mouthful at least 36 times.  Digestion begins in the mouth. Your teeth bite and grind the food breaking it down into smaller particles and the enzymes in saliva activate the digestion process. If you don’t chew, your stomach acids will have to work a lot harder to break down the food and will most likely no succeed. Breathe in between bites. Don’t talk while eating (R.Yosef Caro, Shulchan Aruch).

On a deeper level, proper speech affects/is related to digestion. If you speak ill of others, scream at them, verbally hurt or insult them, use obscenities, or otherwise engage in improper speech, you have used your mouth, tongue and throat, improperly. These organs should be used for making blessings and eating, saying words of kindness and encouragement, and prayer. If we use these organs for negative purposes during speech this will reflect in how we use them or how our body activates them, during eating and digesting. Often people with digestive problems can find relief by becoming more aware and making corrections in their speech.

Those with who are underweight and/or have eating disorders also need to chew and breathe properly, but depending on their individual situation, they might be encouraged to not chew much beyond the minimum amount of times at first, as they will become fuller, faster, and may stop eating too soon.

COMPLETE  In order to complete the process of eating we need to stop and acknowledge G-d, the source of our food, once more. We all know that we are technically full about twenty minutes, give or take, before our brains get the fullness message. But honestly, how many of us act on this information with any regularity? It’s difficult. Eating is one of life’s pleasures. But Judaism takes so seriously the proscription against overeating that even during Shabbos and Yamim Tovim (Holy Days/holidays) overindulging is contraindicated.

Judaism offers fascinating and important recommendations and laws about how much food one should consume at a setting and in what amount of time the food should be consumed, which I hope to write about another time. In order to complete the physio-spiritual cycle that is a meal, one must thank G-d with specific blessings depending on what one ate.

Interestingly enough, though eating only when truly hungry is the rule, there are times where Jewish law says one must eat even when not hungry. This includes the third Shabbos meal and the Afikomen (“Dessert” Matzoh) during the Pesach (Passover) Seder. But even at these times, we are forewarned not to overeat earlier so there will still be some room left!

*Torah here refers to the Hebrew Bible, however Torah also refers to the greater body of traditional Jewish practical and mystical wisdom including the written Hebrew Bible, the oral teachings (the Talmud), the Shulchan Oruch (the Code of Law), the body of work known as the Kabbalah, and numerous other writings and commentaries of the sages throughout our history.

**Rambam’s seminal work is called Mishnah Torah, and he writes concisely but profoundly about health, diet and exercise in the section called Hilchos Deos (an apt translation would be Laws of Personal Growth).

*** Blessings on Food and Drink Links: Step by Step, Advanced, and Detailed

2 responses to “7 Rules of Mindful Eating (The Jewish Way)”